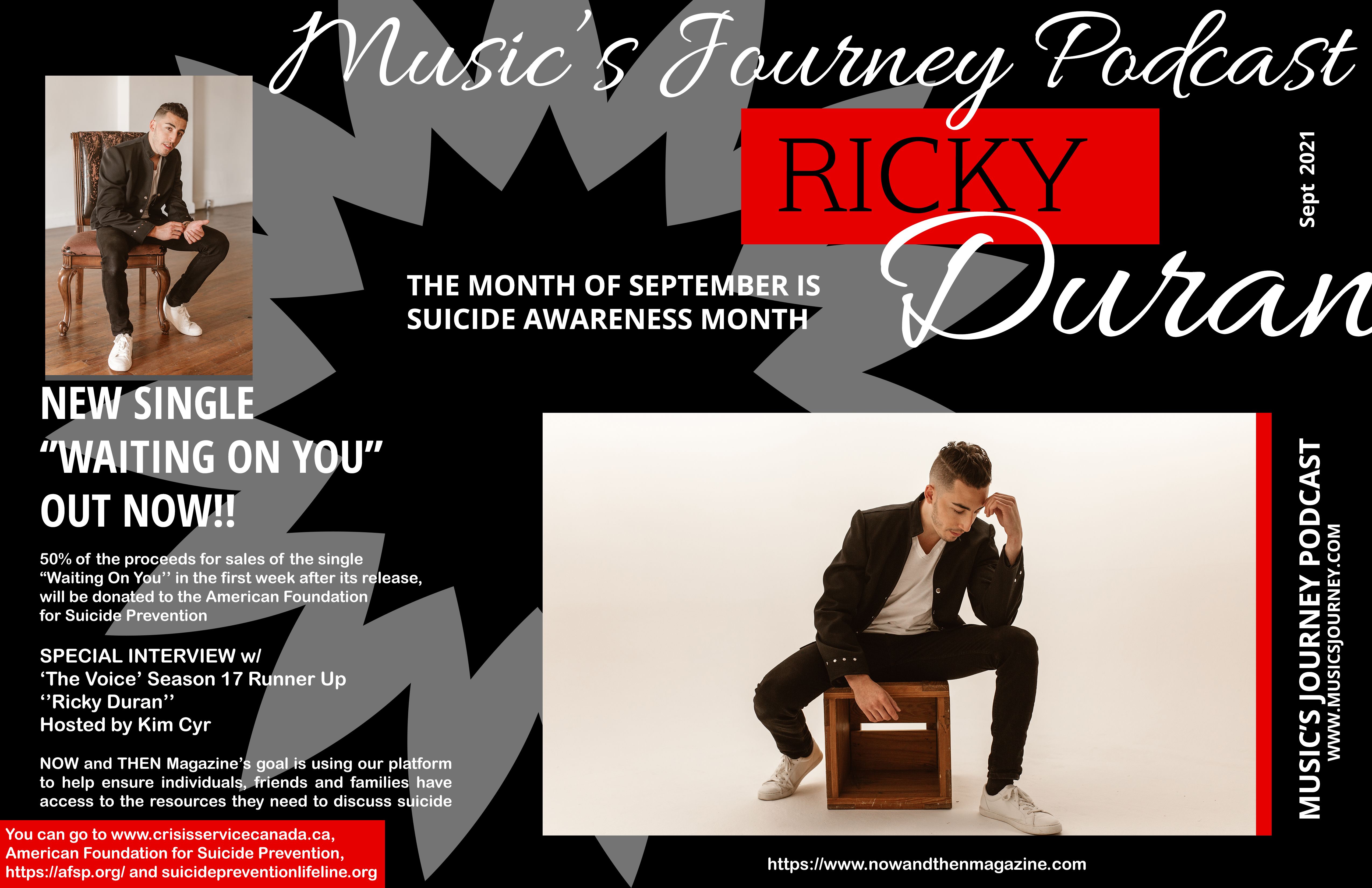 ''Ricky Duran is such a phenomenal human being, a world-class singer-songwriter, and musician,'' says Kim Cyr, Editor in Chief for NOW and THEN Magazine, host of the International Music's Journey Podcast, and radio host on 91.3 FM Bluewater Radio. ''There is so much more to his story and it was an honor and pleasure to interview Duran.''

Duran started his musical journey at the age of 6 when his father gave him his first guitar.  Duran's father was a musician playing the music scene in Boston.  Duran started learning guitar by playing every chord in a song until he had it down perfectly.

''Duran's ability to hear music in the way he does and his ability to interpret the lyrics with the soul and depth that he does is pretty special,'' says Cyr.  ''That can't be taught and I believe it's something you are born with.''

Duran's journey playing live music starting after he finished college at the age of 21 yrs. of age.  Duran built a strong following in Boston, Massachusetts, and then he had his big break when he decided to move to Texas to chase his musical dream.  It was there that he had the opportunity to audition for NBC's The Voice.

''I wasn't expecting my journey on The Voice to turn out as well as it did.  It was pretty surreal. I don't think anyone who goes on the show expects to get anywhere near being in the finale.  I remember standing on the stage on finale night with the last 3 contestants and we all looked at each other and said, ''I can't believe we have the opportunity to be here on this incredible stage doing something we love.''

Duran describes what it was like getting ready to go out on stage to perform in front of the world.

''I think it's pretty normal to be really nervous before going out on a stage like that  I like to take a moment before performing to get in the zone.  I like to really feel the lyrics and understand what I need to do to make that moment count like it's my last.''

Duran remembers the advice coach Blake Shelton shared with him before his performance on the finale night on season 17 of The Voice.  He told me to deliver the lyrics so that every word is believable.  If I could do that then that was exactly what fans would feel when I sang the songs chosen for the finale.  I have always remembered that ever since.  I chose my songs wisely.

''My interview with Ricky Duran was very special,'' says Cyr. ''There is very unique and really special about this young artist that I picked up the moment I saw him perform River in the blind auditions on The Voice.  The standing ovation he received with that four-chair turn was exactly what we were all feeling cheering and watching it all from around the world.  I feel even stronger that there are no bounds to what Duran can do in the music industry.  He is gentle in his spirit and has a deep love of what music and lyrics can bring to someone's life.  He is special beyond words.  I hope that fans can hear the beauty in his music and find hope in what it's like to fight through the toughest moments in life like his sisters and Duran have done.

Duran and his family lost both their parents far too early in life and that journey can be the toughest to get through without pain and darkness.  Duran shares his candid feelings about losing his father in 2012 to suicide and the darkness that surrounded that tragedy.  That kind of loss is very personal and a topic that is extremely difficult to talk about.  He lost his mother too a few years later.  That kind of pain and loss can bury you.

''I wanted to talk more openly and unfiltered about his feelings about losing his father and what that dialog was like inside his mind and heart,'' says Kim Cyr.  ''I think it is critical to talk more in-depth about what each personals journey was going through something like this.  The pain is real, the circumstances in the personal stories of each individual can help someone out there that doesn't know what to do with those feelings of anger, or abandonment that comes with this type of loss.  There is a flood of emotions that hit at different times.  Some hit all at once.  It can be pretty overwhelming and without a support system in place, a person can feel lost and trapped in that pain for life.  The more raw the conversation, the more hope people have to understand what works and doesn't work for those who have lost someone to suicide.''

To hear my full interview and the beautiful music by the incredible Ricky Duran, click on the link below.

We can help by supporting Suicide Awareness Month and take action to provide hope to those who need help today.

Talk is cheap, but Ricky Duran takes action in suicide prevention this September during Suicide Awareness Month. From teaming up with the American Foundation for Suicide Prevention, to releasing an extremely personal song about his father who passed from suicide, Duran is determined to make a difference, not just stand on the sidelines.

Best known as the runner-up in The Voice’s seventeenth season, Ricky Duran won fans over with his story and roped viewers in with his incredible voice and stage presence. Always transparent, Duran shared that not only did his mother pass from breast cancer in 2018, but his father also passed from suicide just prior. On September 17, he has shared one of his most personal songs, “Waiting On You.”

“Waiting On You’ is a track I wrote from my father’s perspective," says the timeless artist. "In a way, I think I wrote this song as a therapeutic letter to myself that I wish I had received before his passing.”

50% of "Waiting On You" sales during the first week will go to the American Foundation of Suicide Prevention (AFSP). In addition to releasing “Waiting On You,” Duran is teaming up with the AFSP for World Suicide Awareness Month in September, as well as hosting benefits for the AFSP including the concert in Austin, TX, and a special WALK in Central Massachusetts.

Back to Black by Amy Winehouse (Cover by Ricky Duran)

This is the time to raise awareness on this stigmatized, and often taboo, topic.  In addition to shifting public perception, I want to use this platform to shine a light on this month to spread hope and vital information to people affected by suicide. Our goal is to ensure that individuals, friends, and families have access to the resources they need to discuss suicide prevention and to seek help.

You can go to www.crisisservicecanada.ca, American Foundation for Suicide Prevention, you can go to https://afsp.org/ and suicidepreventionlifeline.org.

To check out my full interview, click on the link below.  Don't forget that you can check all the interviews with the artists you love on www.musicsjourney.com.  You can also listen to all the podcast interviews on all streaming platforms under Music's Journey Podcast.